Firstly, I shall apologise for the truly awful pun, I just couldn’t resist..

What you are about to read is actually one third of the update I was going to post, but that was so huge and so full of juicy 2.2 news that we had to split it for the sake of everyones sanity. I’m not joking either, it was something akin to an essay and with the screenshots I wanted to put in there you would have gotten RSI from scrolling downwards.

TS 2.2 has one new weapon. Or one and half depending on how you look at things. First off, the beretta can now be wielded single handed as well as in akimbo form, it’s something we’ve been asked to implement since the days of 1.0 and now it’s here, so good news there. Actually, if you’ve been paying attention you’ll have seen a piccy of it in a previous update, but consider this concrete confirmation of it’s existence. Secondly and of somewhat greater significance, is the Thompson Contender. Featured in the John Woo classic Hard Boiled (and the slightly less brilliant Hard Target), it’s a big hitting, single shot hunting pistol. Wielded one-handed which, whilst hideously impractical in real-life, is obviously cooler looking and makes you look more like a baddie in an action movie, which is far more important. Feast your eyes upon the renders of the conteder and the screens of both weapons in action below. 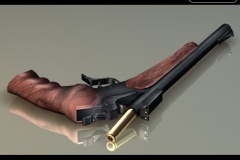 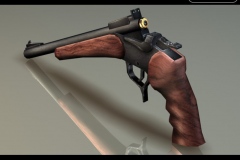 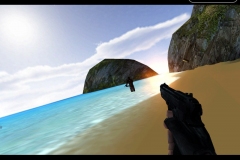 The more astute among you will also have noticed that the beretta is now black, instead of the gunmetal colour it was in 2.1. It’s a small change, but makes them look that little bit more badass. One thing missing from the above screenshots in the hefty scope you can affix to the Contender, it’s deadly accurate and combined with a scope it makes it all the easier to take out that guy hiding on the roof with a barret.

Don’t worry about the rather paltry amount of media at present, I’ll be editing in plenty more in the next few days once we choose which ones we like best.